I have been working in DC this past month and have been overwhelmingly impressed with the amount of cool bicycle facilities that they are constructing and implementing.  I plan on heading back up to DC this week, and I am encouraged by new articles that I am seeing in conjunction with Earth Day and DOTs allocating funds for summer implementation of new facilities in many US cities. This past week, Denver opened 40 B-cycle stations that will provide 400 bicycles for the city’s citizens and visitors to use. New York is pushing forward with adding new cycletracks and additional miles of bike lanes. Today Miami had another successful Bike Miami event that closed down streets and created a Cyclovia type atmosphere in the city’s downtown. 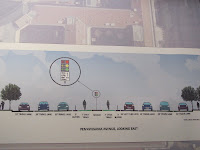 I am excited to see more of what DC is doing when I visit there this week and see how “a bucket of Portland is being spilled on the Capital“. The cycletracks that are being constructed there are the main arteries that are going to feed the city with cyclists. Bicycle ridership generally increases 18-20% when cities add cycletracks, but only 5-7% for bike lanes. New York’s cycletracks also reduced injuries by 56%, crashes by 48%, injuries to pedestrians by 29%, and injuries to cyclists by 57%. Pennsylvania Avenue is getting bi-directional cycletracks running down its median, 9th Street (a 1-way) is getting a new bike lane on the right side and a contraflow lane on the left, I and L Streets are getting buffered bike lanes, and many other streets are getting restriped with narrower travel lanes and new bike lanes.

I admit that not all of these facilities will be successful and I am sure that redesign will occur, but although they are not ideal, they are better than nothing and may be the best way to get cycletracks implemented on a broader scale. Cities that are implementing bike boxes, contraflow bike lanes, center bike lanes, turning lanes to the left or right of bike lanes, bicycle only lights, sharrows, chevrons, driveway markings and two-stage crosswalk cycle track turns, mixing zones… are going to be the cities that increase ridership and get the United States into the game of urban cycling. It will require some education to say the least, but good changes are on the horizon.